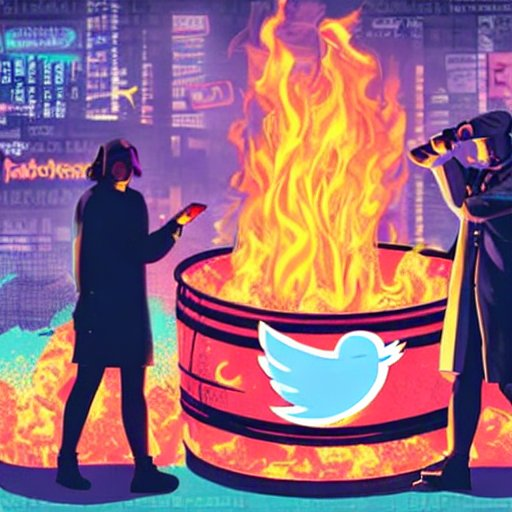 What a crazy year 2022 has been for tech. As we approached the last few weeks of the year, I kept thinking how different this year has felt. For most of the last two decades, it’s seemed like the trajectory of the tech industry has been very much on the rails; processors get faster, devices get both smaller and more powerful, everything moves to the web or mobile, and a handful of very large tech companies are adored by both Wall Street and main street alike. Facebook, Amazon, Apple, Netflix, Google…we even came up with an acronym for them, “FAANG”.

But something happened over the last year or two: Many of these companies started to stumble. Facebook’s user-base declined for the first time ever, sending their CEO on a Quixotic mission to find “the next big thing”. Netflix is finding itself struggling in a rapidly competitive space. And Google continues its mission to eventually convert every service it has into a canceled messaging app.

Up until this year, Twitter just sort of…existed. It was ubiquitously uninteresting, somehow simultaneously both important and irrelevant. Then Elon Musk took it over and disrupted it in about the worst (or best, depending on your perspective) way possible. Throughout all of these developments, it’s felt very hard to see where the trajectory of tech is going. What does the next ten years look like, if all of these infallible institutions are failing?

Right about now, you’re probably saying to yourself, “All of this tracks, but what does it have to do with TILvids?” Which is a fair question, and one I’ve had to ponder myself lately. You see, originally I started TILvids, this PeerTube instance, as a reaction to being disillusioned with YouTube. I had been making content since 2007 for the platform, and while it once seemed so exciting to make niche content that could get tens of thousands of views just because other people cared about it, that feeling had largely disappeared by the time I stopped actively creating for the platform in 2017. I was tired of having to alter my content just to chase a constantly-shifting algorithm in order to get views. I just wanted to make the videos I wanted to make, find the people who used to enjoy that content, and share it with them. It really felt like I lost my friends, and they had been replaced by an uncaring AI that was optimized for something I actively despised.

So I started TILvids, as a way to go in a different direction. I love making and watching edutainment content, and that’s why I made that the focus of our instance. But along the way, it’s become more than that. I didn’t have any notion of decentralization when I started TILvids, I just wanted to build a place that reflected what I loved. But as I’ve watched what is happening to the tech industry over the last year, it finally feels like I can sense where things are headed.

I grew up alongside the rise of the Internet. I remember web rings being the only way to discover content you were interested in. I remember downloading RealPlayer video files from random websites to watch South Park. I remember hopping on various IRC channels to talk to people. I remember the rise of Napster and feeling like “we the people” were collectively building something truly new.

And then everything started to change. Ads became a thing. The “weirdness” of the Internet was sanitized and scrubbed away. Google and Facebook, two scrappy startups, became so big and data-hungry that they knew everything about everyone, billions of us. It feels like it happened overnight, but really it took 15+ years of steady encroachment. And I don’t want to completely disregard what they’ve done, because both companies have innovated, made some good products that people enjoy using, and the centralized nature of the companies certainly made it approachable. But the trade-offs were very large indeed, including all aspects of data privacy and control.

But it feels like the tide is beginning to shift in a new direction. I’ve felt this before. I remember downloading MP3s and recording them out to a tape-deck so I could play my own mix-tapes in my car in the late-90s. I remember buying a Windows Mobile phone in the early 2000s just so that I could load old SNES ROMs onto it to play games. I remember when I canceled cable in 2007 because I was so certain that the future was streaming videos. All of those times, I could so confidently feel the direction of where technology was going, even when your average person on the street was barely aware of these ideas.

And I feel that now too, with decentralization. All of us, on Mastodon, PeerTube, Pixelfed, Matrix, and other decentralized services can feel it. And even if the larger world has no idea what we’re talking about right now, it doesn’t matter, because the we’re already on the inevitable path forward. The future of decentralized services is very bright, and I’m honored to be playing a role in pushing it forward. As we head into 2023, this is what I’m going to constantly run on loop in my head.

As for TILvids, my plans for the community remain largely unchanged. The next year will look like:

Thank you so much for all of the continued support. I’ve said before what a lonely experience the first year of running the site was. Every week, more and more people are reaching out, watching videos and leaving comments, and talking with me and providing ideas and feedback via Mastodon. The fact that people care enough to engage means a lot, and as long as that holds true, I’m going to keep pushing forward.

Happy New Year to us all!